After high school, Jason Stovall pursued a career as an ASC mechanic and worked for different car dealerships for several years before taking a position at Carpenter Company as an automation electric troubleshooter mechanic. As a father of four, Jason said that working the evening shift rarely allowed him to spend time with his kids. He found himself looking for a change.

In 2011, Jason began his career at Logan Aluminum as an Operating Technician in the cast bay of Remelt, where he worked for five years. During this time, Jason was one of the head operators on the Steering Committee, where his team was the first to start hands-free casting.

When the position opened, he was promoted to a Casting Process Specialist. Within six months, he was sent to start up and oversee the day-to-day operation 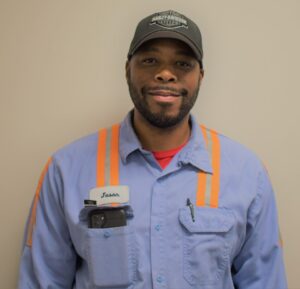 s of DC4’s cast house. When he first started at DC4, Jason said there were a lot of operators that had never worked with molten metal. With only a handful of operators from Remelt and new operators to start up DC4 operations, Jason said he was motivated by the opportunity to help train and prepare other team members in their positions at Logan.

“As an operator, I never thought I’d be in the position I’m now in”, Jason said. “It just shows how amazing the growth opportunities are at Logan. Five years from the time I was hired in, I was promoted into this position as a Process Specialist.”

Three years ago, Jason was selected for the LDP Program, where he had the opportunity to further develop his leadership skills. He said that the best way to advance in your career at Logan was to make use of your time, learn the process, and find a mentor.

Jason is a Todd County native and enjoys cars, playing guitar, drones, and RC helicopters. He and his wife, Tiffany, have been married since 2015. He’s a father of Janisa, Jason Jr., Jasonia, and Mary Lynn.

Jason said he would like to get more involved with other units to learn, grow in his career, and get out of his comfort zone. If you run into Jason on the floor and ask him what he’s doing, he’s known to always gives the same answer of “Hard Work and Dedication”. His response is reflected in the accomplishments of his career here at Logan.