Ronnie Rosser began his career at Logan Aluminum twenty-four years ago as an Operating Technician in Finishing. He worked at Slitter 3 for eight years, where he completed numerous projects within his unit. After showing an interest in Human Resources, Ronnie’s team sent him to the HR department for two weeks to learn about recruitment, budgeting and manpower. After coming back to his team, Ronnie said the HR continued giving him side projects to work on, such as Lockout/Tagout and safety risk reduction. Showing an early interest in safety, he changed to the Safety Coordinator role in the finishing department, where he worked three years. When a position in training development came open, Ronnie worked there for nine years. During this time, he worked on many team buildings, facilitated the Logan Leadership Program and helped build the Logan Development Program.

“My favorite thing is to develop people and see them succeed,” Ronnie said. When I see the lightbulb go off with people—whether it’s with safety, quality, or team dynamics—that’s my version of success.”

In his current role as a safety specialist in ESS, Ronnie still has the opportunity to develop people by showing them the risks that are really out there. Ronnie says that out of all the core values at Logan, safety should be our number one priority. As the leader of Logan’s POWER Steering Committee, he works with representatives from every unit to review plant exposures and to strategize on the best plan of action to mitigate those risks. 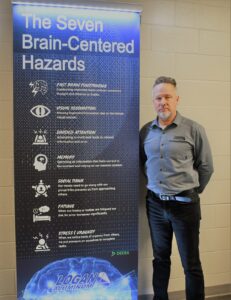 Ronnie’s passion for safety led to him being nominated by DEKRA to speak at a round table discussion on Making Safe Decisions and Human performance at the Safety in Action conference. He and two other speakers had the opportunity to give a presentation in front of over 400 attendees.

Ronnie said that his favorite part of the three-day conference was the fact that so many people came up to him with questions.

“We’re all facing similar problems and there’s a lot to learn from each other. Even if we are competitors, we have the same common goal of keeping people safe,” Ronnie said.

When DEKRA asked him to be on the Steering Committee for the 36th Annual Safety in Action Conference, Ronnie said that he was honored to represent Logan Aluminum. The conference provides a forum for supervisors, managers, and leadership from all over the world to openly network with peers and to learn best safety practices.

There are twelve members on the North American committee, including representatives from Panasonic, Shell, and Toyota. He and other committee members started meeting virtually six weeks ago to discuss logistics, sessions and workshops. In Ronnie said he is looking forward to traveling to Orlando to meet with other members to organize and plan in person.